KOTSOVOLOS is the No 1 electrical store chain in Greece, with 98 stores, an eshop at www.kotsovolos.gr and more than 1700 employees. It is a subsidiary of the DIXONS GROUP.

GlobiLED is proud of this mega project. The needs of this project necessitated the specification of 73 different types of LED Luminaires to be produced and installed by GlobiLED in order to replace the conventional lights and achieve the client’s prerequisites and lighting needs.

The project was implemented in the 48 stores plus the main offices and the company’s warehouses.

GlobiLED designed and installed a special system of safety in LED luminaires. This relates to a specific innovative safety system useful under circumstances where there is an electricity interruption. This system follows the relevant European standards and qualifications.

Energy counters were installed in each KOTSOVOLOS shop, in order to measure the level of energy saving achieved after the replacement of conventional lights with new LED luminaires. It is worth mentioning that high power LED tubes T5 of 155 lum/w were also installed. 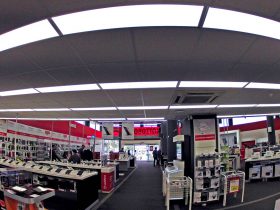